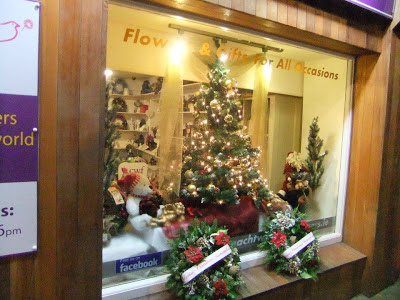 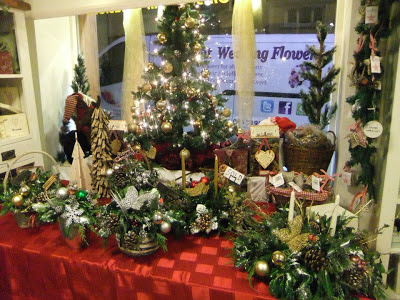 5 Coolest Flower Festivals Around The World

Lets take a look at some of the coolest flower festivals around the world!

This festival usually runs through March, April and May. It is based in Disney World as Master Gardeners and Florists from around the globe gather to create some of the most amazing floral sculptures ever created. You can see all your favourite Disney characters come to life in the gardens and all around Epcot park.


It is said that Colombia supplies as much as 70% of America's purchased flowers. This week long festival was started to celebrate this success in the floral industry. Massive floral arrangements called Silletas are carried through the city to be admired by all. It run's between July 28th and August 7th.


As you can see from the photo this is one massive effort to create a giant carpet from flowers alone. This event which runs bi-annually brings thousands of florists together to create this masterpiece from over 700,000 Begonias.  Belgium has become very well know for producing Begonias as it now produces over 60 million bulbs  a year. The event is held in August of every second year and the design varies hugely each time.

An aerial view of The Flower Carpet:


Florists working on the Flower Carpet below. Not good for the knee caps!

The RHS Chelsea Flower Show, formally known as the Great Spring Show is a garden show held for five days in May by the Royal Horticultural Society (RHS) in the grounds of the Royal Hospital Chelsea in Chelsea, London. It is the most famous flower show in the UK and perhaps in the world, attracting visitors from all continents.
Highlights to the Chelsea Flower Show include the avant-garde show gardens designed by leading names with Floral Marquee at the centrepiece. The Show also features smaller gardens such as the Artisan and Urban Gardens.

Below is a photograph of David Attenborough with a floral sculpture of himself at the Chelsea Flower Show.

Bloom Flower Festival is Ireland's largest gardening show. It is a popular five day event, held each year in Phoenix Park, Dublin. It was first held in 2007 and is organised bu Bord Bia (The Irish Food Board). It is a food and floral festival which is attended by dignitaries including ambassadors, earls and Presidents and not forgetting another 80,000 food and flower enthusiasts. It is half the size of the Chelsea flower show but is still hugely popular. Can't wait for Bloom 2013!

Email ThisBlogThis!Share to TwitterShare to FacebookShare to Pinterest
Labels: Festivals

Origin: Western Europe, Mediterranean and some parts of Asia.

The Cabbage flower is an unusual addition to a bouquet of flowers mostly because it is not in fact a flower at all but a cabbage plant with beautifully coloured leaves. They thrive in cool weather and are in season in late autumn and winter. Their popularity as a cut flower has increased exponentially in recent years due to its durability and distinguished appearance. Strangely Brassica are an edible plant but not as tasty as their well known cousin, the common cabbage.

Posted by Connacht Wedding Flowers at 16:03 No comments: 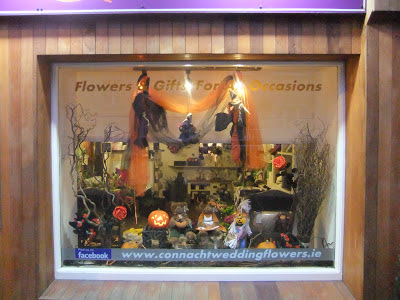 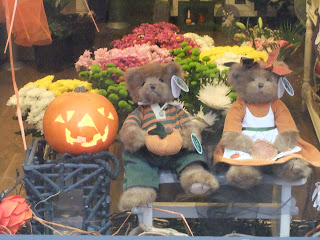 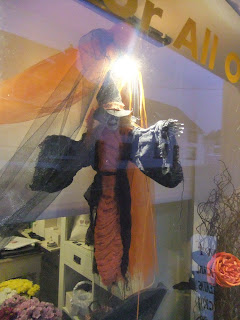 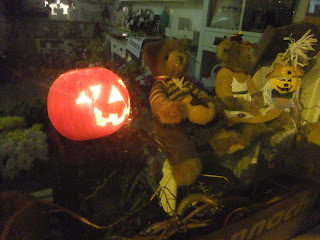 Posted by Connacht Wedding Flowers at 17:41 No comments:

Europe's latest royal wedding took place over the weekend in Luxembourg where heir to the throne Prince Guillaume married his Belgian born bride Countess Stephanie de Lannoy with a civil ceremony on friday and a lavish religious ceremony on saturday in the Cathedral of Our Lady of Luxembourg. The radiant bride (who lost her mother only two months previous) looked every bit a princess in her Elie Saab embroidered wedding gown followed by a whopping 13 foot train. She carried a simple and elegant cascade or trailing bouquet of white phalaenopsis orchids and ivy.


Her bridesmaids wore a soft peach colour with vibrant orange flowers in their hair.

Her flower girls and page boys dressed in the national Nassau colours of Orange and Blue and  the girls carried traditional baskets filled with cream and orange flowers. I love how this couple brought the traditional royal wedding up to date while at the same time maintaining respect for their nationality and tradition.

Posted by Connacht Wedding Flowers at 07:47 No comments: 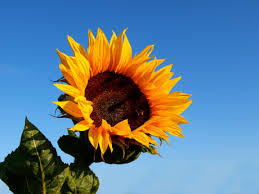 Colours: Bright Yellow but can sometimes come in pale yellow and deep orange or red.

The Sun flower is a strikingly large daisy like flower and belongs to the Aster family. They are recognised from their large brown centre with bright yellow petals. The centre is actually made up of hundreds of tiny flowers arranged in a spiral pattern which will eventually turn into seeds and can then be used for sunflower seeds and sunflower oil. Its botanical name Helianthus comes from the Greek words 'Helios' which means sun and 'anthus' meaning flower. Sunflowers are also one of the tallest flowers and can grow to an astonishing 20 feet however the average sunflower will grow between 5 and 10 feet tall. They are a very popular cut flower and extremely versatile. Sunflowers are quite heavy so are perfect for arrangements and bouquets but can also be used in wedding work too. Check out this beautiful sunflower bouquet we did for a bride last year.

Posted by Connacht Wedding Flowers at 07:01 No comments:

Former Neighbours star Holly Valance married her British property tycoon fiance recently in Beverly Hills and pulled out all the stops when it came to wedding flowers. Rumour has it the floral designs for the wedding cost over $60,000. She opted for a dark and very romantic theme consisting mostly of calla lilies, orchids, twisted willow twigs and hanging amaranthus. Her bouquet was a very simple hand tied bouquet of dark calla lilies and suited her theme perfectly. Holly's choice is illustrative of an emerging wedding theme of dark and sultry wedding flowers which I think is very romantic indeed.

Posted by Connacht Wedding Flowers at 04:11 No comments:

Just an example of some wedding flowers we did last year for Leone and John. They opted for an orange Wedding theme and choose beautiful orange roses and orange gerberas for their flowers. The bridesmaids bouquets were handtied posies of Naranga roses and orange gerberas with a criss cross design across the top. Leone's handtied bouquet included a mix of cream and orange roses with an orange criss cross and finished off with soft satin ribbon. It looked stunning against Leone's beautiful gown. 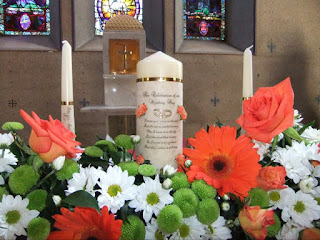 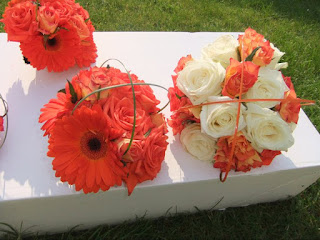 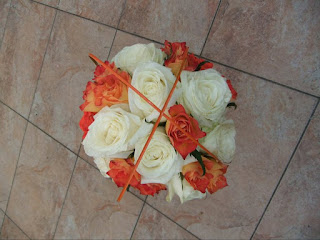 Posted by Connacht Wedding Flowers at 06:18 No comments:

This pretty little flower was named in honour of the German botanist Traugott Gerber. It is the fifth most popular cut flower in the world and is available all year round. They are available with a large head or a small head known as germini. These bright and happy flowers come in intense vibrant colours as well as soft pastel hues. The Gerbera is a sensitive flower and it's longevity will depend on how its cared for. It is much loved for its daisy like appearance and cheerfulness.
Posted by Connacht Wedding Flowers at 02:57 No comments:

With the London 2012 games now in full swing Olympic fever has taken hold. All eyes are on Team Ireland and the anticipation of who will take home a coveted Olympic medal is mounting. Today Cian O'Connor was the first Irish Olympian to be awarded a medal in the London 2012 Olympics. He won Bronze in the Individual showjumping final with his horse Blue Loyd 12. Well Done Cian! But not only did he receive his medal, he was also presented with a beautiful victory bouquet.

The tradition of presenting the winners with flowers dates back over 3,000 years to the original Olympic Games in Greece where wreaths and garlands were presented instead of the gold, silver and bronze medals we know today. In keeping with this tradition a victory bouquet is presented to the top three winners of an Olympic event along with their respective medals.

These beautiful bouquets were designed by Susan Lapworth, creative director at Jane Packer Ltd. She opted for a four rose bouquet sectioned into quadrants by fragrant lavender, rosemary, apple mint and wheat. The roses are all British grown and were chosen for their longevity and resilience. The pink Aqua rose, the yellow Illios rose, orange Marie Claire rose and the green Wimbledon rose certainly make a striking impact when bunched together. It is estimated that over 4,000 bouquets will be presented over the course of this Olympics. Lets hope we see these clutched in the hands of many more Irish Olympians this summer!!

Posted by Connacht Wedding Flowers at 10:01 No comments:

Hi and welcome to our very first blog post.
Here at CWF we absolutely love what we do. Working in the floristry business certainly brings with it many ups and downs but always seems worth it in the end. We wanted to be able to share our experiences with you and so we envisage this blog as being a way to connect with our customers and friends, share ideas and provide inspiration. So for those of you with an interest in all things flowers or indeed all things weddings stay tuned.
Posted by Connacht Wedding Flowers at 15:32 No comments: